Not quite anime today, but anyone who knows me will know that I thoroughly enjoy My Little Pony: Friendship is Magic. I’ve watched up to season 4, though I’ll admit that I have fallen off the horse recently (so to speak); I think the show is up to season 9 now and I haven’t kept up to date. So, I wouldn’t consider myself a “brony”, but I can sympathize, because it is genuinely a good show. It’s got, you know, friendship. And magic. And the voice of the incomparable Tara Strong. At some point, I even knew the opening song by heart, and I am ashamed to admit that I have forgotten most of it.

Why am I bringing this up? Well, I just remembered that a couple of months ago I stumbled across something amazing, namely: 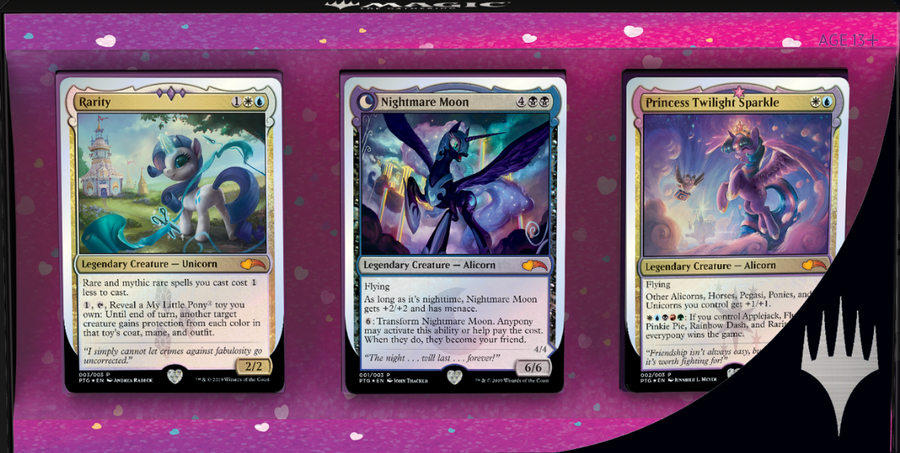 That’s right, a cross-over between MLP and Magic: The Gathering. It’s Frienship is Magic with a capital M. Apparently it’s for some charity event, which is nice.

But anyway, let’s have a look at the card mechanics. You can follow the link above to see the card images, I won’t bother reposting them here.

For the record, my favorite pony is Rainbow Dash. You might find this strange - shouldn’t my favorite be the more scholarly Twilight? - but I empathize deeply with Rainbow Dash. I speculate that this is because we share the same neuroses and the tendency to make vague statements like “this needs to be 20% cooler”.